(aka Hannah Hart, aka My Drunk Kitchen)

With 1.5 million subscribers and over 119 million views on her main channel alone, Hannah Hart is arguably one of the most recognisable female youtube stars of the moment. What started in 2011 as a drunk video chat between friends, turned into a drunk “cooking” show that went viral. Three years later ‘My Drunk Kitchen’ is now a weekly video (more often than not), mixing drunk cooking, puns, advice and a questionable end result, into 4-6 minutes of hilarity. Alongside her usual Thursday posting schedule, she also posts on Tuesdays, allowing Hart to mix it up and produce content with other creators, Q&As and showcase her rhyming skills in the delight that is ‘Tunesday’.

However, I strongly believe that it is her second channel – one which goes widely unnoticed at times – that gives the viewer a true insight into who Hannah Hart is and what undoubtably she will be remembered for, years down the line – A good person trying to do good in the world. The YourHarto channel currently sits at just over 277,000 subscribers with over 16 million views and is home to the ‘Walking Book Club’, the ‘Coming Out’ series, and a series of vlogs, blooper reels and general ramblings. Her ‘Coming Out’ series has helped thousands of young LGBTQ around the world by giving them the courage to face diversity, stand tall and be proud of who they are. More importantly the series has shown that you are not alone and despite people’s hurtful words and beliefs, everyone deserves love. The ‘Walking Book Club’ is a nice concept, actively engaging Hart with her community every month and giving them a resource to read/ listen to books and not only allowing them to talk about it, but encouraging them to do so.

Outside of ‘My Drunk Kitchen’ Hart is so much more than just your standard “youtuber”. She is building a brand, of which ‘MDK’ is only a small part. Hart has successfully stared and produced in her first movie ‘Camp Takota’ alongside fellow youtubers Grace Helbig and Mamrie Hart, she has written and released several songs, is currently in the process of writing a screenplay and is now an accomplished New York Times Best Selling Author. Harts ‘My Drunk Kitchen – A Guide to eating, drinking and going with your gut’ hit stores this August through Harper Collins and shot into the top 10 on the best seller list. The book itself is far from an actual cook book, with Hart herself admitting that none of the “recipes” in the book had actually been tried or tested. Instead, she has branded it as a self-help parody cook book, filled with life advice, words of wisdom and puns, allowing Hart’s comedic voice to really shine.

After listening and watching a series of interviews, vlogs and podcasts with Hart you realise that there is an end goal to all of this, and that is to grow ‘Harto’ as a brand and to give back to the community. She has expressed several times in interviews, her desire to set up a non-profit to help disadvantaged kids who end up in the foster care system. While the end goal may be much further down the line, she is actively promoting and encouraging people of all ages, around the world to start up their own ‘Have a Hart’ days, where the community gathers at a local food bank to sort through and pack produce to help feed the hungry. The first ‘Have a Hart’ day was in December 2012, however throughout 2013, Hart met fans at food banks all over the US as part of her ‘Hello Harto’ tour. In January 2013 Hart set up an indigogo campaign to raise $50,000 to tour around the US and visit 10 cities to meet and interact with her community. Within 5 hours the $50,000 goal was broken and at the end of the campaign, she had raised over $220,000. This resulted in Hart travelling to several cities across the US over the course of two and a half months. In each city she would shoot a parody travel show, film an episode of MDK in a fans kitchen and arrange volunteer meet up’s at local food banks. For a behind the scenes look into how the tour was managed, check out the video below:


For more details on how you can organise your own ‘Have A Hart’ day or take part in one in your area, head over to this link for more information: http://hannahhart.nationbuilder.com/

Authors notes: As a 26 year old straight female I am probably massively outside of Hart’s usual demographic, but as a brand and a person, I think she is fantastic. Her videos provide me with that 4-6minute escape after getting in from a hard shift at work, they have not saved me by any means, but they have made me want to become a better person, not only for myself but for the people and community around me. She has come under fire recently from people saying that her videos are no longer funny, or that she isn’t drunk enough during MDK’s, for me these people are missing the bigger picture with Hart – Fame was not what she intended when leaving college, however she is using the fame she has gained to do good in the world and give back. Many don’t realise (I certainly didn’t) that the ‘Hello Harto’ Tour was actually intended as a goodbye tour*, yet 18 months later, she is still producing content week in week out and is still looking for ways that she and her community can do good.

I for one, am so thankful that she didn’t say goodbye.

Hello… Welcome… Nice to see you…

I’m Claire (aka Mac)… This is my blog… All opinions are mine, and not that of a third party… You don’t have to like them… It’s OK!

– I’m 26
– I live in the UK, i’m a northerner living in the south (I know… pray for me)
– I work in the music industry, I love music, all types of music
– I love roller derby, I am a rookie in training
– I like youtube and some of its content creators
– I went travelling, I want to travel some more
– Want to know something? Just ASK!

DISCLAIMER: If I use a photo, video, question, concept, clothes item, song or pen of yours without asking… LET ME KNOW. Send me a message, I will credit, remove or give it back… 😉

I will aim to post 2-3 times a week, more hopefully… Looking for a community to actively engage and communicate with to form discussions and debates around popular topics in Pop Culture, such as TV, Music, YouTube and Roller Derby. 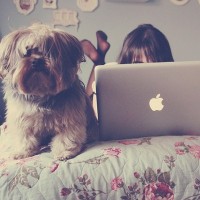